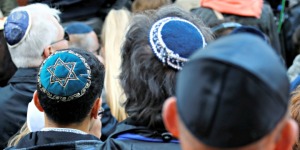 I get nervous when a person who is not a Jew purports to answer the question, “What is a Jew?”

This week, the President of the United States, Donald Trump, has purported to do just that with his Executive Order declaring that anti-Semitic actions on college campuses will be opposed with the Title VI of US law that makes it a crime to discriminate against anyone because of color, race, or national origin.  To be fair, this Executive Order was apparently encouraged by the President’s son-in-law, Jared Kushner, who is a Jew.   The avowed intent is to prevent legitimate criticism of the policies and actions of the Israeli government from flowing over into discrimination against Jewish individuals for being Jewish.  In this light the Anti-Defamation League (ADL) has welcomed the Executive Order.

But there is a darker side to this issue.  Can it be that the President’s motive – suggested by his personal history of strongly anti-Semitic statements – is not motivated by his desire for justice for Jews, but by his desire to shore up his political base (mostly conservative Evangelical) with a public support for the government of Israel?

And a darker side yet:  students of European history from its beginning are painfully aware that the defining of Jews by political tyrants has never ended well for Jews.  Specifically, the defining of a Jew as person of a distinctly other racial or national origin has been the foundation stone for discrimination, oppression, pogroms, and extermination.  Most recently, it was Adolph Hitler’s definition of Jews as a race and nationality apart from German.  The first step in the oppression of German Jews by the National Socialists (Nazis) was the labeling of them as “other.”  The Final Solution was the death camps.

So while on the surface of it the Executive Order to prevent discrimination of Jews on campuses looks like a good thing, just below the surface  it quickly begins to look like something else: a government with a questionable human rights record defining a people as “other.”  The Trump order should be evaluated in the light of the Trump record, and a healthy amount of concern is in order.