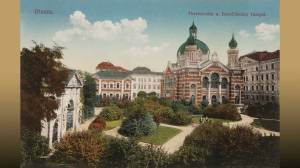 In her day, Maria Theresa had not been a great friend of the Jews. It was an irony, therefore, that so many places crucial to the history of the Jewish people were named in honor of that de facto sovereign, the last but three of the dying Holy Roman Empire. Most were dedicated by her son, Joseph II, perhaps in gratitude for her making his own Imperial career possible. Two of Joseph’s projects, in particular, came to play important roles in the lives, and deaths, of many Olomouc Jews. One was a fortified town near Bohemia’s border with Germany, built between 1780 and 1790. Another was the Theresientor in Olomouc, a triumphal arch in the city wall, completed in 1753. The first, Theresienstadt, would one day become a concentration camp where tens of thousands of Jews died. The second became, in 1897, the site of one of the largest and most beautiful synagogues in Europe. Yet it, too, was doomed to death and destruction.

Rabbi Berthold Oppenheim ascended the bema of the new Synagogue on the proudest day of his life, and the most joyful day in the history of Olomouc Jews. It had begun some two hours earlier as people were entering the Theresienplatz through the Teresien Gate in the northeast. The gate itself was a magnificent Triumphal Arch, intentionally preserved when the city walls had been demolished a few years earlier. It was made with red brick, and faced with granite blocks and friezes. The keystone of the main arch bore an image of the Empress, and above, in Latin, the legend MTHERESA DGRIGHBR and the date MDCCLIII. Maria Theresa, by the Grace of God Emperor of Rome Queen of Germany Hungary and Bohemia, 1753. It had been part of the Theresien Wall, and contained guardrooms within several smaller arches.

Once through the Gate, guests found themselves on a wide greensward with paths winding through trees, shrubs and spring flowers, with the main path running from the Gate to the Portico of the Synagogue. Those who arrived neither too early nor too late encountered hundreds of people milling about, or clustered in small groups in animated conversation. It was a beautiful spring day, a week before the start of Passover. A Sunday morning of light blue skies and large white clouds. And to the left, the magnificent new Synagogue, the morning sun backlighting the massive central dome.

“Herr Gartner! Herr Gartner, over here!” The architect turned and waved, as the cluster of well-wishers approached him. They were upon him in a moment, competing to shake his hand. Jakob Gartner, the renowned architect from Vienna, had been chosen to build the Synagogue, which had been completed in two years at a cost of nearly two hundred fifty thousand gulden. Gartner happily pointed out various architectural features, as the crowd grew larger around him.

The building was designed in the Oriental Byzantine style with alternating layers of red and white brick. The large central dome caught the eye first, topped by a cupola and spire. At the front corners stood two towers with smaller, matching domes, in a rich green. Five arches, three in the central façade and one in each tower, surrounded arched stained glass windows, topped with rosettes. At the peak of the gable were two stone tablets inscribed with the Ten Commandments of the Law. The building measured twenty-two by thirty-nine yards altogether, and the height of the dome was about one hundred and fifteen feet. Perhaps there may have been some sort of synagogue in the old Omolouc, before Ladislav the Posthumous had expelled the Jews in 1454, but certainly it would have been nothing like this. It was a fitting match for the Cathedral of Saint Wenceslaus, across the city.

As 10:00 o’clock neared, the crowd began to hasten through the three front doors, to find the best seats for the concert. The Synagogue had seating for four hundred and forty men and three hundred and four women. But soon there would soon be only standing room. The Jewish population itself was more than sixteen hundred.

The front vestibule in the northwest led directly into the main hall, on the ground floor, for the men. A side stairway led to the women’s balcony, which overlooked three sides of the hall. And in the center of the hall there rose the great dome, an ironwork structure fully as tall as the outside height of the building, and held high by four massive pillars. At the east end of the interior was the elevated bema with the Aron Kodesh, the Holy Ark for holding the Torah scrolls, in the shape of a small temple. Also on the bema were the Table for reading the Torah, and a pulpit for preaching. Beyond the Ark, to the southeast, was a small daily house of prayer, with its own Ark and pulpit, and benches for fifty people. The choir and organ were set above that, facing out into the hall. The organ, a fixture of the Jerusalem Temple, at least according to Scripture, had been reintroduced to synagogue worship early in the century, not without controversy.

The Synagogue organist had been playing a Bach prelude as the guests entered and found their seats. As the music ended, Rabbi Berthold Oppenheim stood, and surveyed the crowded pews. This was the first official function in the new Synagogue, which had not yet seen its first service of sacred worship. That would come on Friday evening, an especially auspicious Erev Shabbat, because it would also be the first night of Passover.

“This is a deeply meaningful day for the Jews of Olomouc,” he said. “Nearly thirty years ago, the Jewish people returned after an exile of four hundred years. Far longer than our forefathers sojourned in Babylon, and very nearly as
long as we dwelt in the land of Pharoah. Almost fifty years ago, after the rebellions of 1848, our beloved Emperor Franz Joseph released us from exile for a time, and many Jews in the countryside began to come back to Olomouc. It took another twenty years for our emancipation to become complete, but since then the Jewish community in Olomouc has grown and prospered.”

Martha Oppenheim looked down proudly upon her husband from her own place of honor in the women’s balcony. Their own journey had been shorter and easier than that of the Children of Israel. Berthold came from a family of Rabbis. He had been called to Olomouc in 1892 after serving as Rabbi for two years in Miroslav, south of Brno. He had studied in Berlin and Breslau, and Martha was certain he had a remarkable career ahead of him. He had only been in Olomouc two years when the Jewish community decided they were big enough for a synagogue. And no small synagogue either! One a hundred and twenty feet high with three domes, and room to seat almost eight hundred people. She looked around at the cavernous hall, filled to capacity. “I thank Thee, Lord, I thank Thee,” she thought

“And so,” he was drawing to a close, “all are welcome here today. Jew and Gentile, rich and poor, Czech and German.” He added the last with careful emphasis. “Please enjoy our brief concert.”