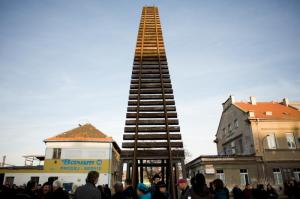 THE MEMORIAL OF SILENCE is the planned transformation of Bubny railway station into a center for discussing the legacy of the past as a stigma of the present. The project is being realized by the non-profit Prague Shoah Memorial (Památník šoa Praha o.p.s.). The organization is currently focused on producing the architectural plans and exhibition script for the memorial’s future permanent exhibition, and also organizes exhibitions and events for the general public.

In coordination with its wide range of partner organizations, the Prague Shoah Memorial has been working to develop the educational program for the future memorial.

During the Second World War, Bubny Station was the departure point for transports carrying tens of thousands of Prague’s Jewish inhabitants to the Nazi ghettoes, concentration camps, and extermination camps. After liberation, the city saw the expulsion of its German population. This stigmatized place will now become a memorial with a modern exhibition commemorating the complex history of the 20th century, and also a space for discussion and critical reflection of the recent past.

The subject of the “Shoah within us” is one of the central themes of the proposed permanent exhibition. The memorial’s aim is to engage in a timeless dialogue in order to remember not only the victims of deportation, but to also focus on the stigma of those of organized the Final Solution and to remember the role of the passive silent majority that did nothing to stop them… For these reasons, we have chosen to call our project the Memorial of Silence.

If we can succeed in preserving Bubny station as a place of memory even as this part of the city sees massive development, then its tumultuous history will be sufficiently remembered and nobody will ever be able to erase this “gate of no return.” Nevertheless, the central theme for the Memorial of Silence’s permanent exhibition will be a timeless approach to dangerous social phenomena that appear again and again throughout history. We hope to call attention to the face of prejudice, xenophobia, racial enmity, and discrimination on the basis of “otherness” in the world today. Our seasonal projects and educational program will focus primarily on contemporary issues whose roots lie in this complicated history.

After signing a fifty-year lease with Czech Railways in 2013, the project is ready to move to the phase of renovating the train station building. We are also working with a wide range of partners the educational programs for the future memorial and the surrounding space associated with it.

The project has gained increasing awareness among the general public and currently enjoys broad support from the cultural and political spheres. In 2013, an Honorary Board was established, whose members include former U.S. Secretary of State Madeleine Albright, Special Adviser on Holocaust Issues at the U.S. State Department Stuart Eizenstat, former Czech Minister of Foreign Affairs Karel Schwarzenberg, founder of Art for Amnesty International Bill Shipsey, Lord Alf Dubs, and professor Philip Zimbardo.

Go to the Memorial of Silence