A Novel of the Holocaust by Walter William Melnyk 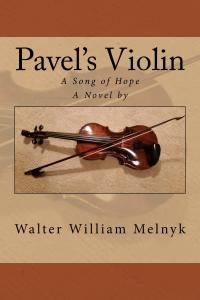 From 1942 – 1945, Paul (Pavel, in Czech) was a prisoner in the Terezin and Auschwitz concentration camps. He survived the camps, and the final Death March from Auschwitz. Pavel had been a violinist before the war, and after his escape his brother found a “not so new but nice” violin for Pavel to play.

Pavel lost many members of his family in the camps, but a few survived. A descendant of one of those survivors inherited the violin and, many years later, became my violin teacher. This is how I came to play “Pavel’s Violin.” The violin itself is a beautiful Jakob Stainer model, built perhaps in the mid-1800s. In the novel, it is made by Stainer in 1670, and we trace its journey from Stainer’s home in Absam, Austria, to the Prince-Bishop’s Palace in Kromeriz, Moravia, to the Jewish community in the Moravian countryside, to the great synagogue at Olomouc, to Terezin, then Auschwitz, and finally to the Carpathian Mountain, where it finally becomes “Pavel’s Violin.” Along the way, the Violin is a metaphor for the human condition: our joys, fears, sorrows, hatred, loves, and our hope for a good future.

“Pavel’s Violin” is a work of historical fiction, a genre peculiar enough to be seriously misunderstood. Historical fiction is not literal history that has been fictionalized to the point that its details are not reliable news accounts of what happened. It is fiction inspired by historical events in order to convey truths which are deeper than literal. Historical fiction, at its best, serves as a metaphor that can draw a reader into a story as a first hand participant, rather than as a consumer of facts. This is what I have tried to do with the story of “Pavel’s Violin.”

I hope you will not just learn about what happened, but that you will become part of the story, yourself. That you will stand beside Jakob atop Kartellerjochl, with Pavel in a cattle car transport on its way to Auschwitz, with Nurse Ilse and her children as Zyklon B pellets fall among them in the gas chamber. And more. I hope you will not only hear the Violin, but will experience the playing of it. The sound of its music under your left ear. The vibrations of the wood upon your chin and shoulder. Most of all, I hope you, too, will realize the compulsion of the story, and the obligation to recount it, in your own way, to others.

This story is inspired by the memoir of Tommy Lustig, Pavel’s son, “Children on Death Row,” also available on Amazon. All author royalties from the sale of “Pavel’s Violin” are donated to the United States Holocaust Museum, and other Holocaust Memorials.